New benchmark listing of the Galaxy J2 (2016) reveals 2GB of RAM, other specs

Only yesterday, a benchmark listing revealed some of the hardware specifications of the Samsung Galaxy J2 (2016). Today, an AnTuTu benchmark listing has popped up for the same device (SM-J210F), but with slightly different hardware on board. While the Spreadtrum SC8830 quad-core SoC has been mentioned here as well, the RAM is listed as 2GB, while yesterday’s leak mentioned 1.5GB.

This suggests that Samsung could be testing two variants of the smartphone, although we hope the company sticks with the 2GB variant. The AnTuTu listing confirms the presence of Android 6.0.1 Marshmallow, while also mentioning the addition of a 5MP front camera and an 8MP rear camera. Oddly enough, the display resolution is listed as 720 x 1080 with no mention of the display size. The handset will also have 16GB of storage according to this AnTuTu listing.

With the Galaxy J2 (2016) already making its way to the benchmarks, a launch shouldn’t be far away now. 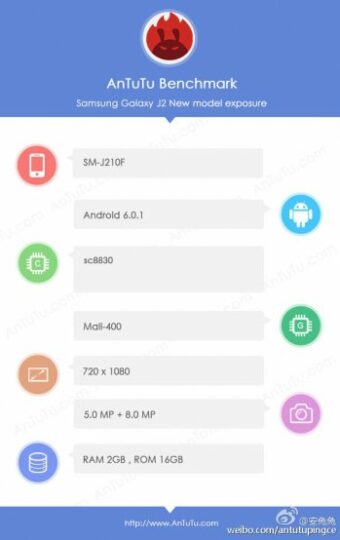