One of the most anticipated phones each year has to be Samsung’s new Galaxy S flagship. This year it is no different and the Galaxy S7 and Galaxy S7 edge have seen the light of day after numerous leaks and rumors. Samsung usually brings an upgrade to its display technology with each new flagships, and we decided to do a detailed screen analysis on the Galaxy S7 edge to see how the display fares.

First the basics. The Galaxy S7 edge has a 5.5-inch Quad HD Super AMOLED screen with curves on both sides. It has a resolution of 1440 x 2560 pixels and a pixel density of approximately 534 PPI. The screen has the exact same pixel layout as the S6 edge – the infamous Diamond PenTile pixel layout, which you can see in the close-up picture below. 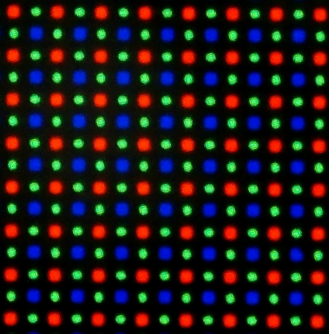 What this means is that this is an excellent screen in terms of brightness, and you can read the display easily in bright sunlight while at the same time keep your eyes safe from strain in the dark. What really surprised me is the amount of brightness it produces in auto brightness mode – 714 cd/m2 is a lot and the highest we’ve seen on Samsung’s flagship devices! Do keep in mind that the phone will only go so bright when there is a really bright source of light falling on the sensor, for example in the sun or something like an LED lamp. In regular lighting conditions the brightness levels will be considerably lower, somewhere in the 500 nits range.

When we look at its color gamut and the colors in the sRGB color space, we can conclude that every color misses its target point and the screen is thus oversaturated (a common theme on AMOLED displays and with this display it isn’t any different). The white point is pretty much off target (which you can see in the graph on the right side below) and is leaning towards the colder side of the colors (green blueish). The margin of the displayed primary and secondary colors isn’t that good, with a Delta E error of 6.4 being too high, which is something we see all the time in this screen mode.

The error of the Grayscale color is not too great at 4.7 and the whites are blueish here as well; that is something manufacturers do to make the whites look more white, especially on AMOLED displays. The contrast ratio, however, is unmeasurable so that is extremely good. Blacks are really black, yet when we get to the lighter colors we see that blueish tint popping out and red is almost completely gone. This is something you can see at the color temperature as well, with a temperature of 7413 being too cold (and 6509 is the sweet spot).

Same old, same old, that’s the case once again with Adaptive mode. We aren’t a big fan of it (not that some of us mind using it), but it can be changed to Basic mode. The basic mode is the closest you can get to a nicely calibrated screen, though the display can look a little dull when you first lay your eyes on this screen mode. In the sRGB color space it scores great as it hits most of the targets, with the margin of the displayed primary and secondary colors having a Delta E error of 1.7 which is extremely good. The white point is just a tad off center, but nothing to make you worry about.

The Grayscale values surprised me a little. I thought it would be better, because when compared to the Galaxy A8 the margin of error in Grayscale is double – 1.5 on the A8 versus 3.1 on the S7. With a color temperature of 6343 it is a lot closer to 6509, which would be the best score. Its contrast ratio is extremely good and we can conclude this unmeasurable thanks to the inherent feature of AMOLED displays.

The mode I always use is AMOLED Photo, which gives you the punchiness of Adaptive Display mode without making it feel a bit too much. Both the margin of the display primary and secondary colors and the error of Grayscale color – 4.5 and 3.2 respectively – are acceptable. Color temperature is almost the same as Basic mode, and contrast ratio is just as good as the other modes.

This year, Samsung’s flagship display can go extremely bright; the color reproduction is really good, and I only hoped the grayscale performance had been better (the Galaxy A8 had a better score compared to the Galaxy S7 edge in Grayscale mode, which is a bit hard to fathom. By all means though, the Galaxy S7 edge’s display is exceptional, and maintains the standards you expect from a flagship in this day and age.