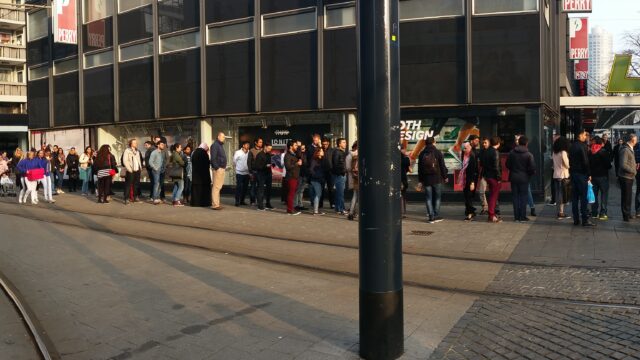 The day we have all been waiting for is finally here. It’s April 10 and Samsung has finally released the Galaxy S6 and the Galaxy S6 edge. Its carrier and retail partners have been taking pre-orders for the last couple of weeks but starting today you’ll be able to just walk into a store and buy the new devices. From the looks of it quite a lot of people are doing just that. We have pictures from the T-Mobile store in Rotterdam, The Netherlands and you can see just how many people are lined up outside one store to get their hands on the Galaxy S6.

We concluded in our Galaxy S6 and S6 edge review that these are the most beautiful phones Samsung has ever made, and they well and truly are the company’s new weapons to establish its dominance in the Android kingdom once again. Both new devices are available in three different storage variants – 32GB, 64GB and 128GB, most of our readers appear to be going for the 32GB and 64GB variants. Samsung has released the Galaxy S6 and the Galaxy S6 edge in 20 countries today. In the coming weeks the new handsets will make their way to additional markets across the globe.