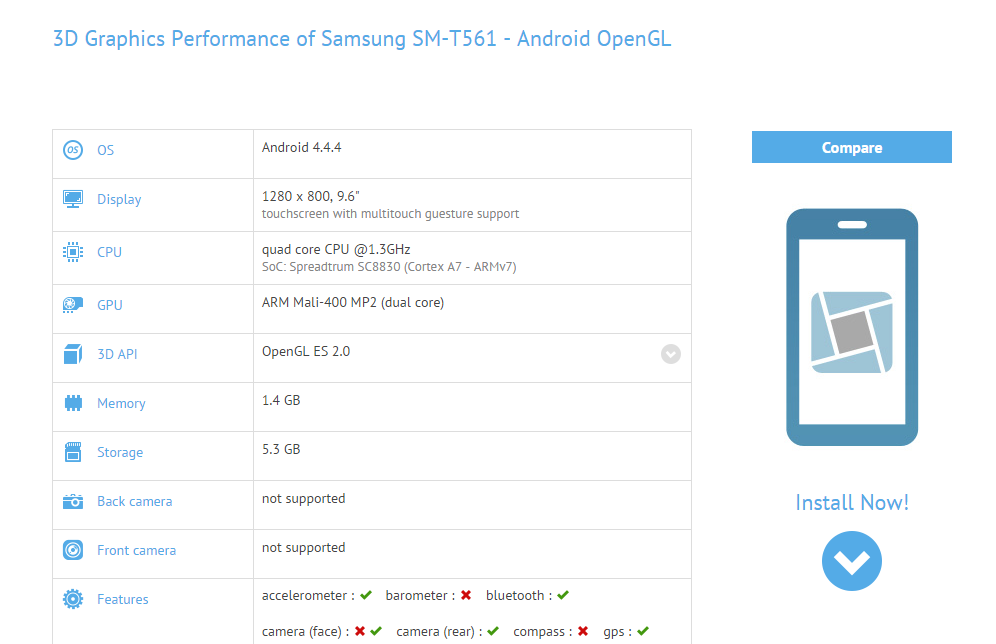 Samsung has been working on a new series of budget Android tablets dubbed the Galaxy Tab A and Galaxy Tab A Plus, which we exclusively reported on earlier this year. Both the Tab A and Tab A Plus are set to have 8-inch and 9.7-inch variants, and it seems Samsung has yet another 9.7-inch tablet in the works with extremely entry-level specifications.

A Samsung tablet with model number SM-T561 has shown up on GFXBench, giving us a look at most of its specs. The SM-T561 has a 9.7-inch display with a resolution of 1280×800 pixels, which means we’re not looking at a screen with a 4:3 aspect ratio, unlike most of Samsung’s upcoming tablets. The tablet is powered by a 1.3GHz quad-core Spreadtrum SC8830 processor, has 1.5GB of RAM, and comes with 8GB of on-board storage. The tablet is running Android 4.4.4 and has no cameras according to the GFXBench listing, suggesting the tablet is in an early stage of development at this time.

The Galaxy S6 and Galaxy S6 edge might be the nicest smartphones Samsung has designed, but the Korean manufacturer still needs to focus on entry-level devices if it intends to take on the competition in the burgeoning emerging markets. This particular tablet doesn’t really look like it will impress anyone looking for an Android slate on a budget, but we will need to hold judgement until we can glean more information on the device.