Feature Focus is a new series of editorials we are launching, where we choose a particular feature of a device and tell you everything about it. For our first Feature Focus article, we have put the Galaxy Note 4’s S Pen under the spotlight. So, let’s get started, shall we?

It was at IFA 2011, where Samsung introduced the world to its first Galaxy Note device ever. The Galaxy Note had two unique features which made it different from the rest of the smartphone market, a big display and a stylus. This was when styluses had become obsolete, and a 4-inch display size had become the sweet spot. Samsung played a risky hand, got a straight flush, won the entire pot.

Nowadays, every single mobile manufacturer has a flagship phablet device in its lineup, but the Korean giant is the one getting most of the sales. Samsung achieves that with a perfect mix of uncompromising hardware and feature-packed software, and the S Pen. Ever since Samsung has launched the S Pen, it has been a key differentiator between Samsung’s large screen devices and its competitors’. With each iteration of the Galaxy Note, Samsung has given upgrades to the S Pen as well, always making it better than before. 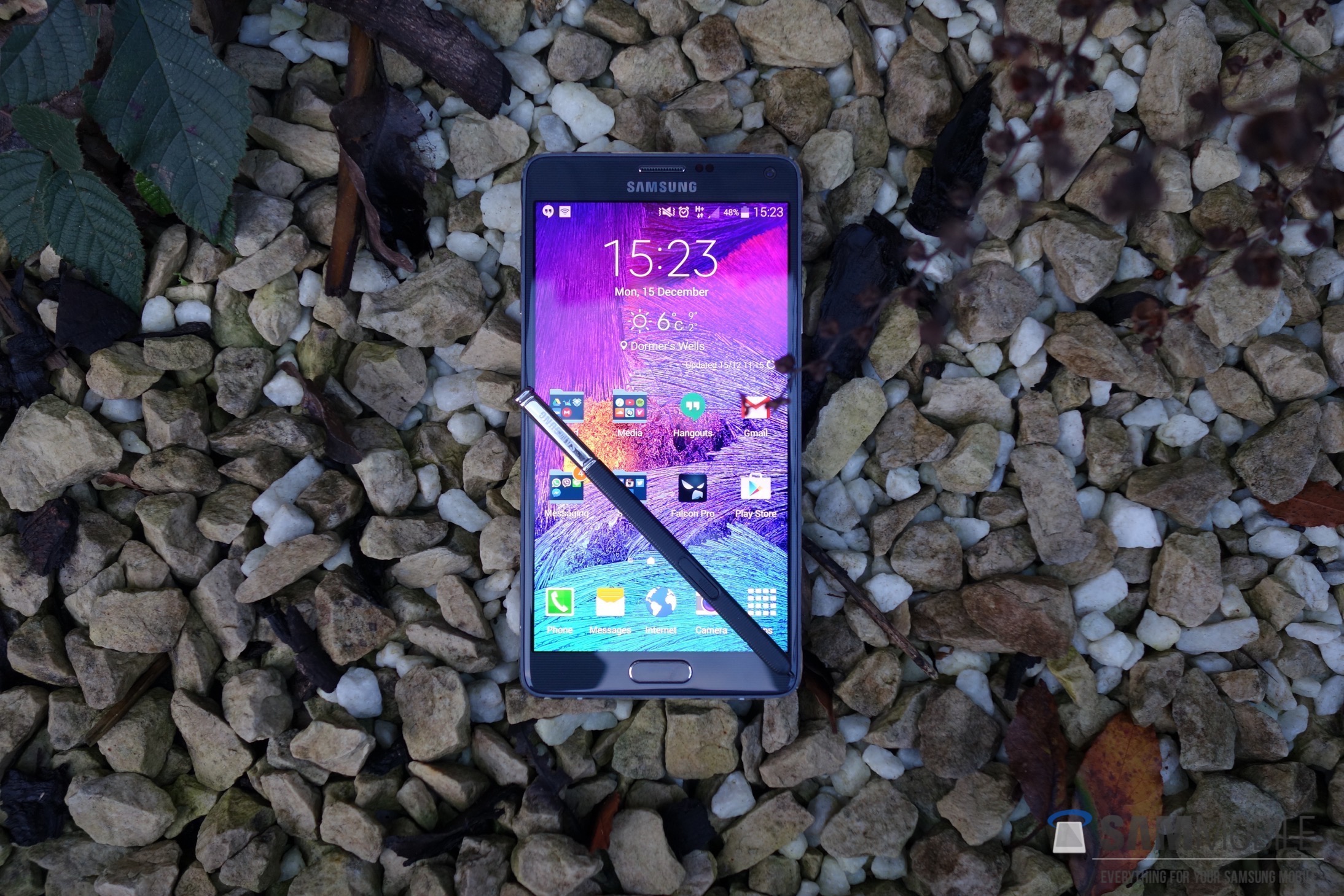 The latest evolution of the S Pen comes with enhanced handwriting ability, and support for pivot, speed, and tilt. It also comes with increased pressure sensitivity – 2048 pressure levels; double the pressure levels of its predecessor (1024 pressure levels). With the increase in pressure sensitivity comes sensation of writing on actual paper, literally. Also, the glass surface is so smooth that the tip of the S Pen simply glides on top of it flawlessly. Now, the tip does wear out over time due to friction, but don’t worry about it too much, as Samsung ships additional S Pen tips and a tool to replace them along with the Note 4.

Design-wise, it’s very similar to its predecessor, except for two differences. Those two differences are that the new S Pen is a bit slimmer, and has a lined texture all over the pen, which helps improve the grip.

Enough about the hardware, let’s talk about the software now. It was with the Galaxy Note 3 when Samsung actually started giving some attention to the software side of things, where it added new S Pen related functionality and, at the same time, improved its S Note application as well. And, to be honest, we started using the S Pen more often with the Note 3 than we did with previous iterations of the device, simply because we didn’t find any use for it except note taking; however, it can do so much more now, we use it regularly with the Note 4.

As soon as you take out the S Pen, from the bottom right side of the device, you will get a little detach sound, a notification stating “S Pen has been detached”, and Air Command will pop open on the display. Air Command is a cool little tool equipped with four useful S Pen features, which include Action Memo, Smart Select, Image Clip, and Screen Write.

Action Memo is the fastest way to jot down memos, and we can link certain actions to memos as well. For example, if we write down a phone number, we can make a call, send a message, or save it as a contact. Moreover, we can use the data in our memos to email someone, list it as a task, search the web, or navigate to a location using Google Maps. Action Memos can be saved under a library in S Note, and can be converted into an S Note file – for all your advanced editing needs.

Smart Select allows the user to collect content quickly, which the user can then save to Scrapbook, share them with other devices, or paste them into applications. If the selected content includes text, the view text icon shows up, which collects all the text from the content and allows it to be only shared. Furthermore, if the Smart Select system detects information, such as phone numbers, addresses, or email addresses, we can use it to perform relevant actions. For example, if our selected content consists of a phone number, we will be able to call that number using Smart Select, instead of dialling it manually.

Image Clip allows the user to clip part of an image, which then can be saved to Scrapbook, shared with other devices, or pasted into applications. The clipping can be transformed into a rectangle, circle, square, or into an auto shape – which automatically adjusts the selection.

Screen Write captures a screenshot of the current display and allows the user to write memos on it, which can then be shared. A copy of the image also gets saved under screenshots in the Gallery, for later use. Screen Write is by far our favorite feature of the Note 4; it’s one of those handy tools we use nearly every single day – it’s simply excellent.

In the new S Note application, users can create different notebooks for different content, which users can customize by assigning a name and using a different cover. Samsung has built in a plethora of templates for users to choose from – there are varieties like travel note, movie review, checklist, schedule, recipe, and more. A notebook can also be exported into an image file or a PDF file, this way users can store a copy of their notebook on their computer, and also share it with others.

The new S Note application also allows users to backup their notes in the cloud, either in a Samsung account or an Evernote account. This way, users are able to access their notes from a computer, and other mobile devices as well. Moreover, for confidentiality, users can lock a notebook, or move it to the device’s secure private storage.

Samsung has added two new noting options: calligraphy and fountain pen. These new options are useful for digital signatures and autographs. We are now also able to create pen presets, where we can save our pens and their specific configuration. In order to access the preset pens, we can tap the preset pen icon in the bottom left corner of the display, or access it using the usual pen menu.

The S Note comes with a really innovative feature called Photo Note. It allows us to take a picture of a document, which it then processes to make it editable, so we are able to make changes to the document. Another feature the Korean giant added is Voice Memo. Voice Memo records our voice and simultaneously converts it to on-screen text. This is helpful in interviews and meetings. There is now an S Note widget available as well, which gives access to all these features right on the home screen.

In the past, S Note’s biggest issue has been that Samsung designed it specifically for the S Pen, and that led to people not adopting the app for their usual note taking. With the Note 4, Samsung has fixed exactly that, and now it’s an all-rounder note-taking app. Actually, in our opinion, it’s one of the best note taking apps on Android, period.

Samsung’s latest S Pen can do some things which emulate it as a mouse. For example, in the gallery, to select several pictures at once, just click the button on the pen and drag. We can do the same with text throughout the operating system, using the same click and drag combination. The Korean giant has brought back Air view and Direct pen input from the Note 3 to the Note 4 as well. 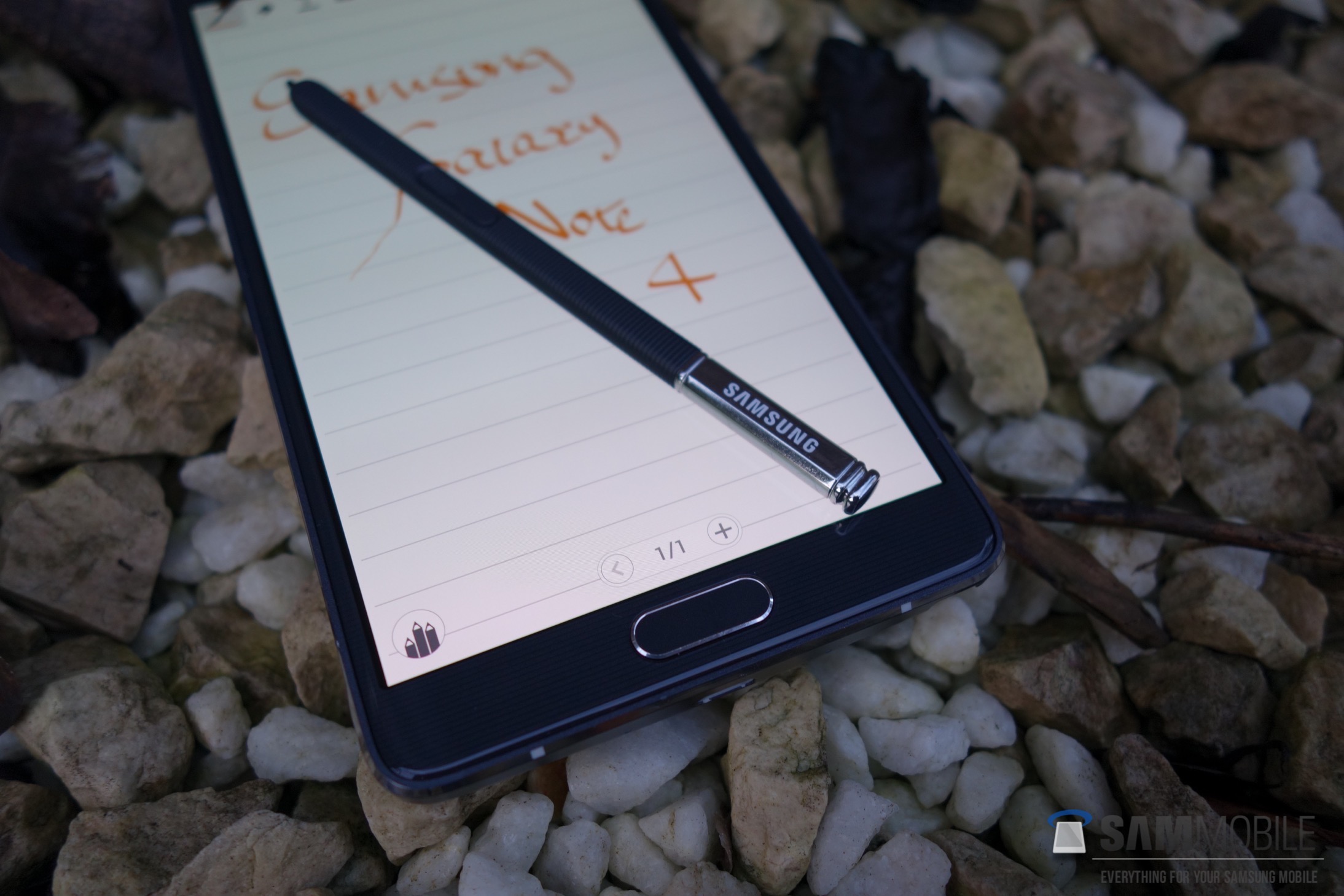 We would like to receive your feedback on our new Feature Focus editorial series, please give us your opinion in the comments section below.