Last week, a Samsung phone with model number SM-G8508 showed on the GFXBench benchmark database, sporting specs like a 4.7-inch 720p display and a quad-core Snapdragon 800 processor. Now, the Exynos variant of the same device has appeared on GFXBench, sporting model number SM-G850. The specs of the SM-G850 are similar to the SM-G8508S, except that it has 32GB of internal storage and is powered by an octa-core Exynos chip – it’s the third time we’ve seen a flagship-like device with a not-so-high-end screen, but it’s still unclear what the device will be named and when it will launch in markets.

Judging by the clock speed, the SM-G850 seems to be powered by the same Exynos 5 Octa CPU that powers phones like the Galaxy Note 3 – like the Snapdragon 800 variant, this suggests that the SM-G850 won’t have the latest specs but will still offer a high-end experience. It could be the Neo version of the Galaxy S5, similar to the Galaxy Note 3 Neo launched earlier this year – support pages for the device went up on Samsung’s website almost two months ago, but we will need to wait for further details to get a better picture of where the SM-G850 fits in. 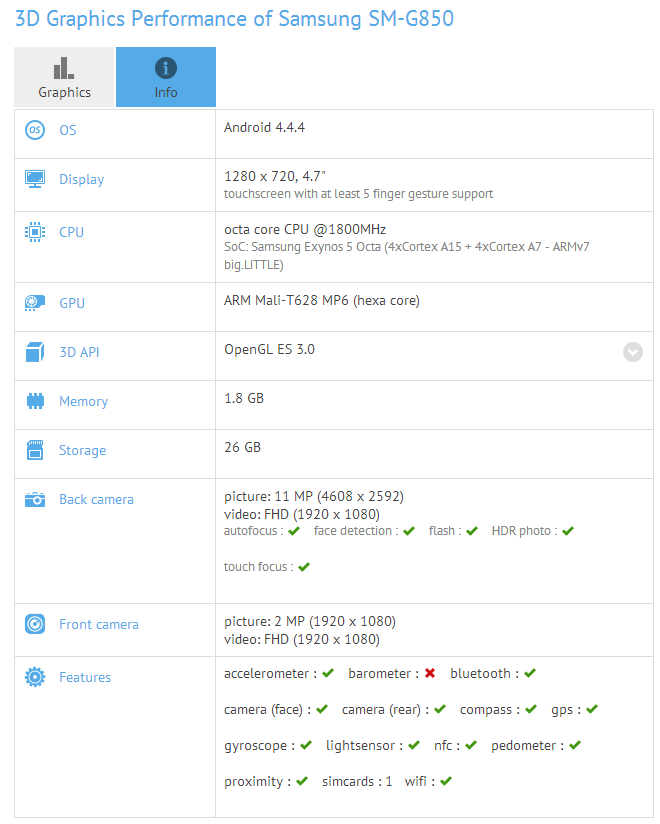