At its “Voice of the Body” event last night, Samsung introduced a new health platform that it hopes will take wearable sensors and devices to a higher level when it comes to tracking a user’s health, by collecting data from various sources and uploading it to the cloud. To this end, Samsung showed off the Simband, a reference wearable device that any manufacturer can use to build their own devices without having to work from the ground up. The Simband comes with an array of sensors that gather various details, such as body temperature, oxygen level, or heart rate. Unlike the Gear smartwatches, Simband is an open platform which Samsung hopes other companies will embrace.

The health platform is called Samsung Multimodal Architecture Interaction (SAMI), and any data stored on the platform by any device based on the Simband can be controlled by the user. Developers will also have access to this data for creating custom applications, but in the end, it is the user who will own said data. For those not wanting to use the Simband as reference for their own device, Samsung will also make available open APIs that developers and manufacturers can use to upload data from their custom wearables to SAMI, a move that Samsung says is a bid to “connect more brains with more sensors.” 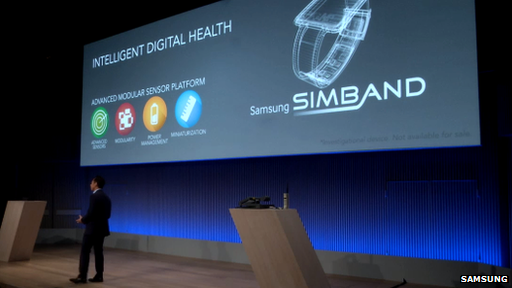 While the Simband looks like Samsung’s existing smartwatches, with Wi-Fi, Bluetooth and a proper display inside, it’s not a product that will go on sale for consumers anytime soon. Instead, it is simply an example of where the Korean manufacturer hopes to take the wearable industry when it comes to health-tracking, and given the open nature of the platform, it shouldn’t be long before other companies start to take advantage as the wearables market gets set to be the next big thing in the industry.

Samsung unveiled the Simband, a reference wearable that manufacturers could experiment with, back in 2014. The unit was packed full of sensors that tracked blood pressure, skin temperature, sweat production, blood volume, heart rate and more, leading many to believe that it would be released once the Apple Watch, which was rumored to be a […]

Remember SAMI (Samsung Multimodal Architecture Interaction), Samsung’s health platform for cloud-sourced health tracking that was introduced about an year ago? Well, Samsung invited developers to take advantage of the platform, and one of the early adopters is Body Cap from France, who showed off a pill that monitors core body temperature using SAMI. The company’s new product dubbed […]

Back at its digital health event in May, Samsung introduced a new health platform for cloud-sourced health tracking. It showed off Simband, a reference wearable device which manufacturers could use to build their own products on top of without having to start from scratch. So today at the Samsung Developer Conference the company announced that […]

There’s a lot of stuff that happens in the mobile industry, something that is especially true when it comes to giants like Samsung. If you missed out on some (or all) of what happened in the last 24 hours or so, well, here’s a recap of all the big things that went down. Samsung launched […]