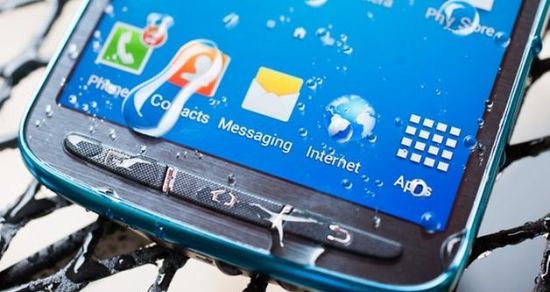 Last week, it was rumoured that Samsung was working on a waterproof version of the Galaxy S5. While that in itself isn’t astonishing, Samsung is said to be targeting around 20 to 30 percent of total Galaxy S5 sales to come from this device. The move is believed to arise from a need to sell more handsets that are dust and water resistant. An anonymous source confirmed the same, stating that waterproof and dustproof will be two “basic features” of all upcoming Samsung premium smartphones launched this year.

There might actually be something to this rumor, as Samsung is said to have cancelled its order of 5 million LDS antennas, and is instead going to use IMA (in-mold antenna) technology in its handsets. LDS antennas are usually fused onto the back plate of a device and are thin, but do not allow a device to be waterproof. IMA allows a device to be water resistant, but is thicker in size. This is why the Galaxy S4 Active was bulkier when seen against the Galaxy S4.

However, a manufacturer by the name of Daesan Electronics is said to have created an IMA antenna that is almost as thin as an LDS antenna, so it is likely that Samsung would use this antenna technology in the Galaxy S5 Active. Samsung is said to be manufacturing around 5 million units of the Galaxy S4 Active initially, with further production to be based on consumer interest in the handset. While there is no word of an official launch date, the device is rumoured to hit store shelves sometime around May.

AT&T has finally released the Android 5.0 Lollipop update for the Galaxy S4 Active. The carrier is rolling out the update over-the-air right now but it may take a couple of days for it to go live across all regions of the United States. It brings all of the features and improvements that come as […]

Soon after launching its 2013 flagship called the Galaxy S4, Samsung released a “rugged” variant of the same smartphone. It was called the Galaxy S4 Active only because of the fact that it is water and dust resistant, making it a good device to take up against the elements. It was never claimed that the […]

There’s a lot of stuff that happens in the mobile industry, something that is especially true when it comes to giants like Samsung. If you missed out on some (or all) of what happened in the last 24 hours or so, well, here’s a recap of all the big things that went down. The international […]

Samsung has started rolling out the Android 4.4.2 KitKat update to the international version of the Galaxy S4 Active, a month after it was rolled out to (and then pulled from) the AT&T variant in the US. The update, currently out in the Netherlands, will bump the software version up to I9295XXUCNE5 and bring features such […]

Earlier last week, we mentioned that AT&T was getting ready to roll out the Android 4.4 KitKat OTA update to the Galaxy S4 Active. However, the carrier has now halted the rollout and mentioned that it is working with Samsung to improve the OTA. It is likely that AT&T has discovered stability issues after the […]

Looks like this weekend is going to be an exciting one for owners of yet another Samsung device. The Galaxy Note 10.1 2014 Edition started receiving the KitKat update yesterday, and it turns out that so has the AT&T variant of the Galaxy S4 Active in the U.S.. AT&T has announced that KitKat is now […]