The Galaxy Gear is Samsung most controversial device of 2013, it was released and was hated for the lack of notifications. But what it did have was a beautiful 273ppi Super AMOLED display. Shortly after its release, there was an app in Samsung’s Gear Appstore called Watch Styler. At first I started playing around with it and created personal watch faces with custom backgrounds of my son. Later on, I went on to the XDA forums to see if there were people creating custom watch faces too, and then something happened which changed my whole world.

Before getting into the Galaxy Gear, I was a ROM flashaholic. I used to flash custom ROMs on my mobile devices day and night but this hobby of mine has now been replaced by an another hobby, creating custom watch faces. This brings the everyday struggle of which watch face should I wear today.
It is something anybody can do, and everything can be done right on your phone.
There are a few basic steps you need to follow and you are ready to make your own custom watch faces, first thing you need to do is to go ahead and download the Watch styler App from Samsung’s Gear Appstore.

To install themes:
– Create a random new theme with the desired name in Watch Styler , and save it.
– Close Watch Styler.
– Unzip the downloaded theme.
– Replace the unzipped contents of the new theme folder (at Phone\Android\data\com.omnitel.appcessory.gear.watchstyler.manager\theme\) (you will see a folder with the name of the just created random watchstyler theme)
– Open Gear Manager and select the Watch Styler theme.

Below a short clip how to do it.

There are 2 very good watch face designers called OpenMind_NL and Maxim_r, both are active on the XDA forums and took some free time out of their busy lives to answer a few questions for us. 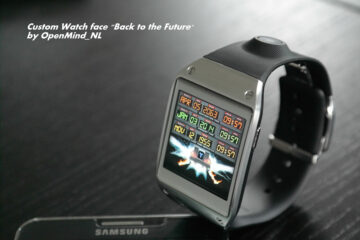 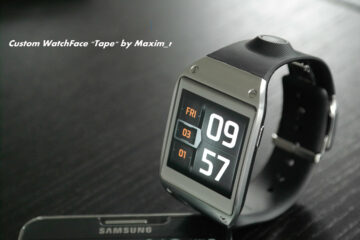 So who are you?? And please tell us a little something about yourself.

Hello my name is Alex AkA OpenMind_NL on XDA and I live in Holland . Because of my studies in electronics and computer technology, my interests and activities are in a fairly wide area. Building computer systems, design and construction of small custom digital electronics projects, programming, web development, graphic design, music composing, sound engineering, photography, video, etc. … and recently composing clocks for Gear smart watch.

Hi, my name is Maxim, I’m from Moscow.
I am a professional designer, mainly engaged in web-design, graphic design, branding, animation, 3D-modeling and photography.

What you think of the Gear as a Smart watch?

(Alex) As with any new technology, there are still plenty of wishes. But since frequent updates are released, I am confident that the number of these wishes will only become less in the future.
At present, the gear might be a bit on the expensive side, but it’s the smart watch with the most comprehensive capabilities. The first buyers of new gadgets always pay much because of the development costs. I suspect prices to go down quickly.

(Maxim) In my opinion Gear is the most balanced smart watch today.
I think Samsung were right to not give it access to all functions of Android, just turning the clock in another smart phone. By implementing basic functions only, Samsung has achieved a stable working Gear and has prepared a good basis for future updates to come.
Of course, there are certain functions that it lacked, but I want to believe that Samsung will be actively improve the software of the Gear, adding new and improving existing features.

How did you get into the watch face theming business?

(Alex) On the xda-developers forum people asked whether it was possible to have the design of the Sony SW2 clock on Gear. Since the layout and the font are not available in Watch Styler, I decided to investigate whether Watch Styler’s theme.json file offered more opportunities. And it did. After copying the Sony SW2 design, more ideas came naturally…. and from wishes of other users.

(Maxim) I’m a perfectionist, and the first thing I wanted to do when I turned on my Gear, was to change the font on the watch face 🙂
Then I began to look at the possibilities of customization watch face.

(Alex) That depends on the design. A simple clock can be set up within an hour.
But when the whole should be dressed in new matching graphics, it may take several hours to complete.
I usually start with setting up a basic clock in Watch Styler, so the required information such as time, date, day, battery meter and bluetooth are displayed. Then I start to think about how to fit this information to the chosen theme and I’m going to adjust theme.json to determine the position and font of the items. Eventually I work in Photoshop on the graphic elements to complete the design.

(Maxim) Depends on the idea, it may take several hours or even several days.
I’m starting to work with sketches on paper and with font selection. That’s how an idea is born of ​​the future watch face. Then I make a layout in Photoshop focusing on a Watch Styler’s grid.
The next step, I transfer this layout on the clock, by editing Watch Styler’s theme.json file, replacing standard graphics and fonts.I need to make sure that all the sizes are correct and everything is working as it should. After that, there is the final drawing in Photoshop of all parts and check them on the clock display.

What you think about Samsung not releasing their SDK into the public?

(Alex) I didn’t know that.
I guess that explains why there is not an explosion of new apps yet.
But I can imagine that Samsung would first like to do further development in cooperation with some selected developers. This makes us kind of beta-testers I guess.
I don’t really have a problem with that, as it ensures Samsung a fast and clear kind of development without too many people whining in public.
Despite that, I think that Gear is a very satisfying accessory for mobile use already.
I think that Samsung might provide an SDK to the public when Gear 2 arrives. If they don’t provide it, I’m sure it will become public ‘by itself’. Nothing that has been written can hide for the internet.

(Maxim) Frankly I do not know anything about it.
Third-party developers could offer a lot of interesting ideas for the applications of the smart watch and thus made them more popular.
I think sooner or later Samsung will make the SDK available for public.

“We of SamMobile like to thank you for your cooperation and hope that you will create a lot more of these beautiful creations.”