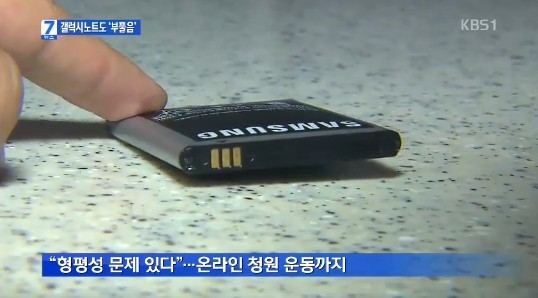 Uh oh, here’s one more example that Samsung’s quality assurance team isn’t doing a very good job. Reports recently surged worldwide that the batteries on the Galaxy S4 were swelling after a few months of use, prompting Samsung to start offering free replacements. Now, one of the biggest TV stations in South Korea has revealed that the swelling issue is occurring in batteries of the original Galaxy Note as well, with the battery growing in size and shape.

Samsung is reportedly claiming that this is because the batteries have reached their end of life, but if that had been the case, we’d probably have tens and thousands of swollen batteries sticking out of smartphones and mobile phones in this technology-infested world, so this might just be a result of Samsung designing its batteries to work properly only for a couple of years (not that batteries don’t swell up after two years of usage, but it’s a not-so-common occurrence.) Of course, the even bigger problem here is that affected users won’t be able to get a free replacement, as the battery on the Galaxy Note (and the device itself) is long past its warranty period. Maybe Samsung will see sense and offer replacements (are they even making batteries for the original Note anymore?), but it looks like people will have to spend their money on getting a new battery, either from Samsung or a third-party manufacturer.

Any of you have a swollen Galaxy Note battery? If yes, did you get it checked out by Samsung, or did you just buy a new one straightaway?