Samsung and Apple take all the profits, leave nothing but scraps for other manufacturers

The mobile industry has been a two-horse race for quite some time now, with Android and iOS being the most popular operating systems, and Samsung and Apple have similarly been the two major manufacturers that dwarf all others in the market. Well, the dominance of the two carries over to mobile industry profits as well, as according to the latest data from Canaccord Genuity, Samsung and Apple account for 109 percent of profit in the mobile market. Apple took the crown with 56 percent of profits, while Samsung came in close with 53 percent.

You’re probably wondering why the profit share is 109 percent instead of 100 percent. Well, that’s because other manufacturers are actually losing money in the mobile business (BlackBerry was most affected, representing a negative 4 percent of industry profits), with only Sony managing to break even and keep things balanced. The share controlled by Apple and Samsung would have been lower if the profits of Chinese companies was included in the data, though that information is currently unavailable. 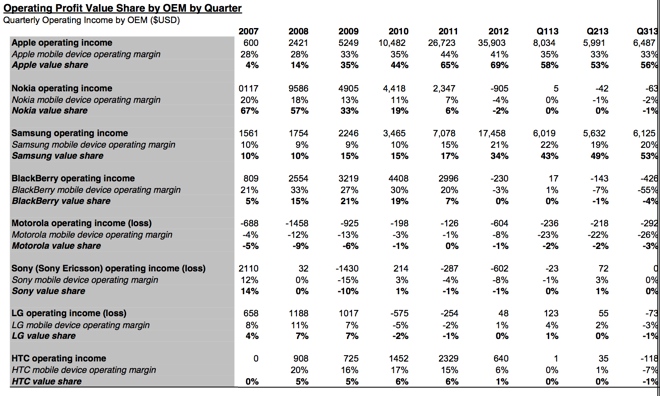