A Galaxy J5 owner in France told The Associated Press today that her phone caught fire and exploded on Sunday. Her story makes it sound like the handset combusted in a manner similar to what we’ve seen with the Galaxy Note 7 but you shouldn’t jump to conclusions just yet. Lamya Bouyirdane said that she found the Galaxy J5 to be very hot when she took it back from her four-year-old son. It was only then she realized that the phone had “swollen up” and it later started emitting smoke. She threw it away and the handset then caught fire, she adds that the back blew right off.

Samsung has not yet commented on this latest incident of one of its devices catching fire but it’s common sense that this isn’t related to the Galaxy Note 7 in any way. There are countless variables here that need to be considered. Whether the charger that was being used to charge the device is genuine, whether the device has been subjected to external pressures beyond what it’s made to withstand, whether it was repaired at some point by a technician that didn’t do the job right, etc.

It’s also pertinent to mention here that Bouyirdane has acknowledged that she purchased her Galaxy J5 online from a website offering discounts. It’s unclear whether her handset was sourced from an authorized Samsung retailer or reseller because it clearly wasn’t bought directly from Samsung. While Bouyirdane says she plans to sue Samsung over this incident, this is far from an open and shut case, and should certainly not be treated as such. 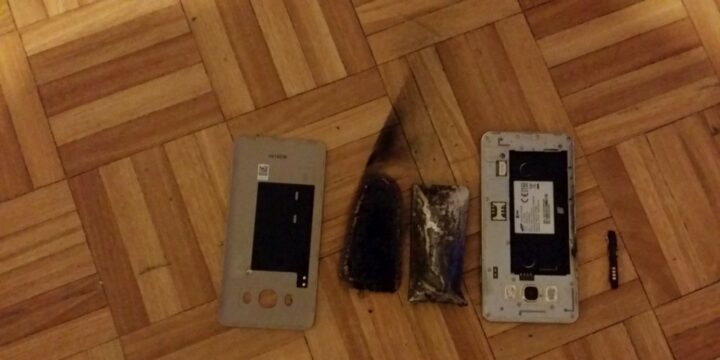