A patent application Samsung filed back with the US Patent & Trademark Office in 2012 showcased a dual-display smartphone with an almost negligible seam between the two displays and the latest application shows that the company has improved the initial idea. The new patent builds upon that idea. It’s not positioned as a device that has a single seamless display when opened and would be great for watching movies, TV shows, etc. It’s positioned as a professional notebook meant for students and business customers which they can use along with an S Pen to get stuff done. For this purpose, Samsung has designed it to be a very light smartphone and has thus eliminated the heavy mechanical hinge that we saw in previous dual-display designs from the company.

The latest design has two displays and the second display doubles as a functional unit. It’s the one that’s going to have the input devices, sound devices, sensors, wireless charging pads, antennas, and other components. Other features will include ultrasonic input  over and above multi-touch, a project, sensors of UV, grip, biometrics, and more. It may even have a TV module. The patent also notes that this device may also include at least one medical device which could either be a heart rate, blood pressure, body temperature or blood glucose monitor. Samsung filed this patent application back in November last year. As is the case with patents it may take a long time before the inventions we see here are turned into reality, so it’s not like you can expect this new and unique smartphone to arrive in a few months. 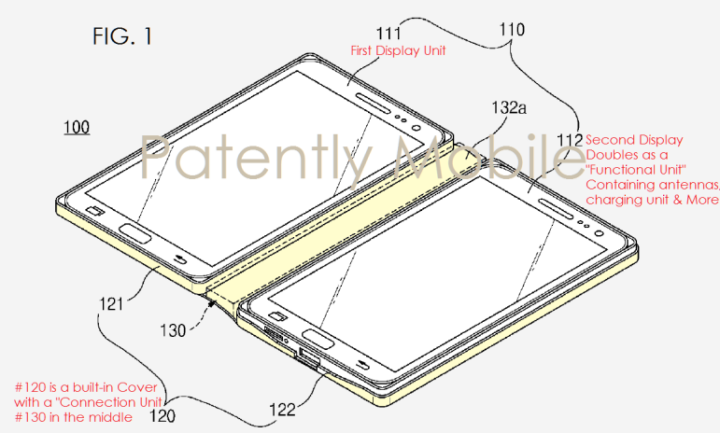