Business By Dominik B.

In a move signaling support for President-elect Biden, Samsung is set to create more manufacturing jobs in the United States. The development is hardly a surprise seeing how Samsung was already doing the same for years, even before the outgoing administration was in office. Yet it was always careful not to publicly align with President Trump, to the point of not even accepting seemingly harmless – albeit misguided – praise.

It’s still too early to tell whether Samsung will be more openly friendly toward the Biden administration. In fact, it’s probably safer to assume it will still keep its distance from politics, especially given how much pain doing the opposite caused it on its home turf over the course of the last decade. Especially seeing how Trump himself was never too supportive of Samsung’s U.S. mobile ambitions, to say the least. 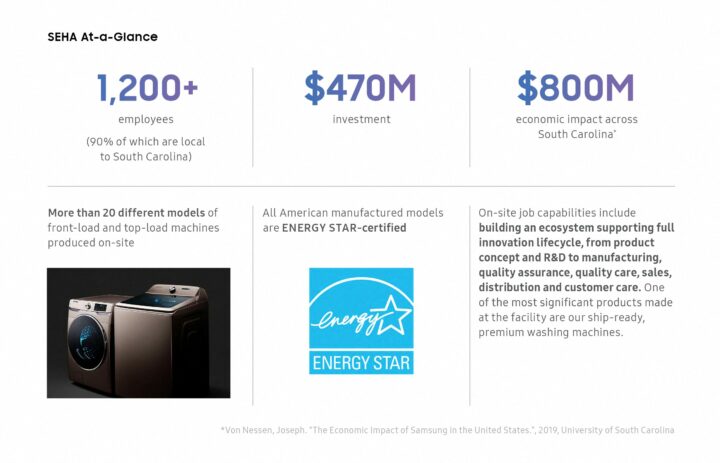 With that said, the company now appears to be signaling a new round of investments in its South Carolina factory which already exceeded the original goal of creating 1,000 American jobs by about 200 roles as of today, three years following the start of the project.

The home appliance manufacturing facility (SEHA) in question also warranted a $470 million investment over the same period, a steep increase over the $350 million figure that was first planned. Of course, Samsung is doing the wise PR thing by labeling the difference a success. It’s hard to blame it for not doing otherwise seeing how much focus both the current and incoming U.S. administrations place on domestic job growth. But only time will tell if this added momentum is sustainable. For the time being, Samsung appears confident that it is.