It has been reported multiple times that Samsung is serious about improving the performance of its mobile division. Its making changes to smartphone lineups and going all out on upcoming flagships to spur growth in the high-end segment once again. Samsung truly felt the pinch in Q4 2014 when its year-over-year shipments were down substantially but Apple’s soared enough to match it for the world’s top smartphone vendor crown. Apple’s quarterly earnings results for Q4 2014 revealed that the company shipped 74.5 million smartphones aided by the stellar performance of iPhone 6 and iPhone 6 Plus.

A report by Strategy Analytics shows that Apple’s smartphone shipments stood at 51 million in Q4 2014 while in the previous quarter they jumped up to 74.5 million. Samsung too shipped around the same number of smartphones in Q4 2014 but it was down from 86 million units in Q4 2013.

That said Samsung is still very much the top smartphone vendor when you look at the entire year. Its total shipments have crossed 317 million units against Apple’s 192.7 million in 2014.

The report points out that Samsung is facing intense competition from the likes of Xiaomi and Huawei in the low-end and mid-range segments whereas Apple is giving it a run for its money at the high-end segment. 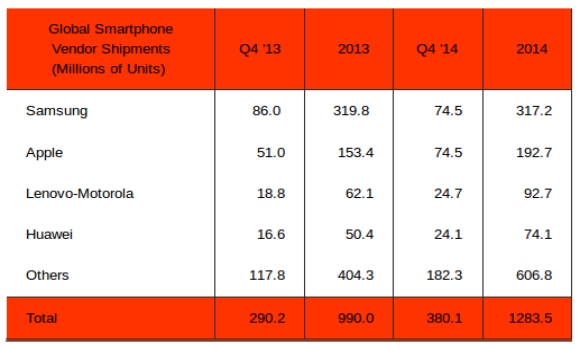