A new variant of the premier Samsung phablet, i.e., the Galaxy Note 4 S-LTE (SM-N916) is all set to launch in South Korea mid-January, which is roughly 20 days from now. We’ve leaked info about this device previously; if you remember, it’ll have a Qualcomm Snapdragon 810 SoC to go with the large 5.7-inch display. The phablet will now offer a downlink of up to 300Mbps on this new variant (450Mbps in theory), and will be made available for major Korean carriers SK Telecom (SM-N916S) and Olleh (SM-N916K).

This will mark the launch of the Galaxy Note 4’s third processor variant; the phablet is already available in Exynos (7 Octa) and Snapdragon (805) flavours. Besides high-speed network goodness, this variant will also bring to the table 64-bit computing for the Galaxy Note series. What this also means is that the Note 4 S-LTE will be the world’s first commercial device to adopt the SoC. The release, however, is expected to be Korea-only for now.

Update: A new leak has revealed that the Galaxy Note 4 S-LTE is powered by an Exynos 5433 processor with the Shannon 333 modem, and not the Snapdragon 810 as earlier thought. 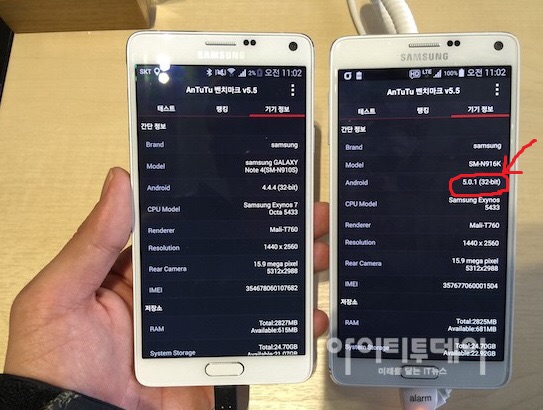