When the first benchmarks for the Exynos 5433, the chip powering some variants of the Galaxy Note 4, hit the web, it was noticed that the 5433 was ahead of every other mobile chip when it came to performance in benchmarks, except the Nvidia Tegra K1. The Tegra K1 has been touted by Nvidia to be a “desktop-class” SoC, so powerful that it’s only meant for tablets (though nothing is stopping a manufacturer from using it on a phone.) However, Samsung is now alleging that the Tegra K1 is not as powerful as those benchmark scores indicate, and has sued Nvidia for misleading consumers in benchmark figures that compare the SHIELD Tablet with the Galaxy Note 4.

The suit is, in fact, a countersuit against Nvidia’s lawsuit against Samsung earlier this year that said the latter had infringed on some of Nvidia’s graphics-related patents in its mobile chips (which has caused the US ITC to investigate some Samsung devices.) Samsung’s lawsuit against the popular GPU manufacturer alleges that Nvidia also used six Samsung patents without licensing them; Samsung is also suing Velocity Micro, a company that uses Nvidia’s graphics cards and hence is being accused of using two of the Korean manufacturers.

Nvidia, of course, is denying any falsification of the benchmark scores, saying that both the SHIELD Tablet and Galaxy Note 4 were tested out of the box. Samsung isn’t too innocent as we’ve seen it tinker with benchmark scores on the Exynos version of the Galaxy S4 and Galaxy Note 4, but it seems like both Nvidia and Samsung will be trying to prove that the other is the only guilty party in what could be a long and drawn out legal war. 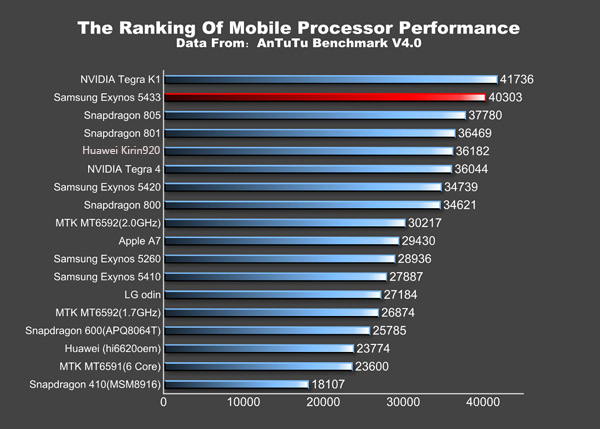