Samsung SM-A500 shows up on GFXBench

One of Samsung’s upcoming A series phones, the SM-A500, is making yet another appearance in the wild, this time through a listing on the GFXBench benchmark database. The benchmark listing has revealed most of the specs of the device, which fit nicely in the mid-range. The hardware includes a 4.8-inch HD display, a 64-bit Snapdragon 410 processor, 2GB of RAM, a 12-megapixel rear camera, 4.7-megapixel front camera (this will likely be a 3.7-megapixel unit like the Galaxy Note 4’s), 8GB of storage, and Android 4.4.4 KitKat.

Some of the specs are similar to those of the Galaxy Alpha, and the SM-A500’s design will be similar as well, which means it will have some metal in its construction. With the high amount of leaks about the device in recent days, it shouldn’t be long before Samsung makes an official announcement, though it will likely be a few weeks after initial excitement about the Galaxy Note 4 and the Galaxy Alpha has died down. 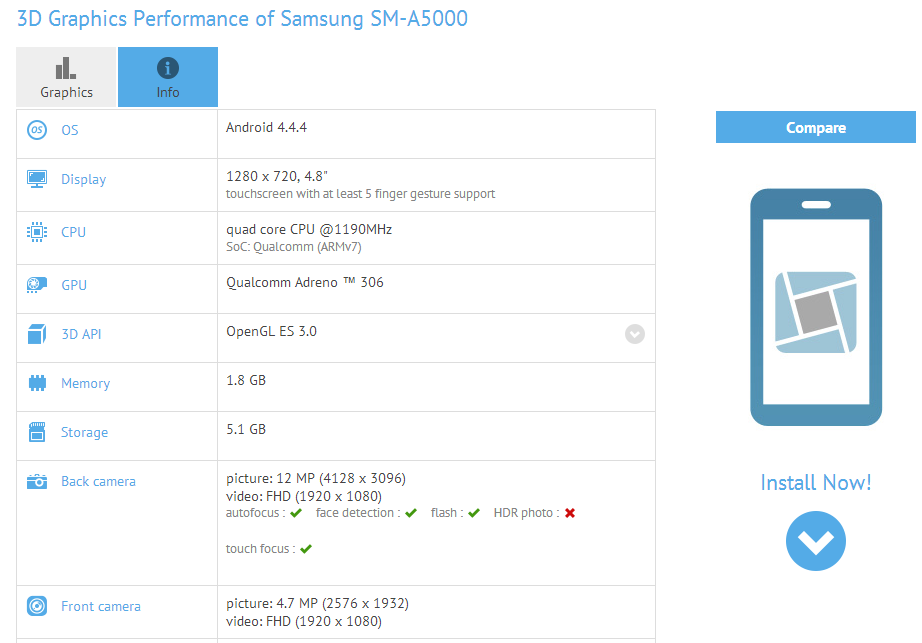 Samsung completes Lollipop rollout for Galaxy A lineup with the Galaxy …

Samsung Galaxy A3 and A5 coming soon to Europe, firmware now online

Samsung Galaxy A3, A5 official in Malaysia; Galaxy A7 coming next mont …

Samsung Galaxy Grand Max and Galaxy A7 leaked, will be released in Sou …