We all knew the Galaxy S5 mini was coming, and now the compact version of Samsung’s latest flagship has been officially announced by the company. Samsung is once again pushing its mini phone as a smaller yet well performing version of the current Galaxy S flagship, and thanks to the inclusion of features like a fingerprint scanner and heart rate sensor, that claim is actually worth something this time around. The Galaxy S5 mini is built around a 4.5-inch Super AMOLED display of 720p (1280×720) resolution, an upgrade both in screen size and resolution over the Galaxy S4 mini.

The phone looks pretty similar to the Galaxy S5 (something we already confirmed earlier in an exclusive leak), and even has the same textured back cover that we have come to love on both the Galaxy S5 and the Galaxy Tab S. There’s a heart rate sensor at the back, the home button also serves as a fingerprint scanner, and the handset is IP67 certified for water and dust resistance. 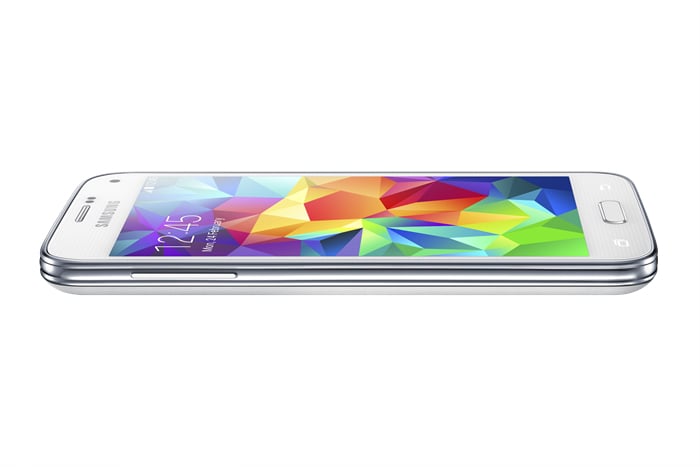 Under the hood, the Galaxy S5 mini is powered by a 1.4GHz quad-core processor – the type of processor isn’t mentioned, but it’s likely the new Exynos 3470 chip that our sources told us would be debuting on the S5 mini, with the same clock speed and number of cores. . Update: According to AllAboutSamsung, both the LTE and non-LTE variants will be powered by the Exynos 3470 chip, which will bring Samsung’s in-house SoC to Europe after a long time. 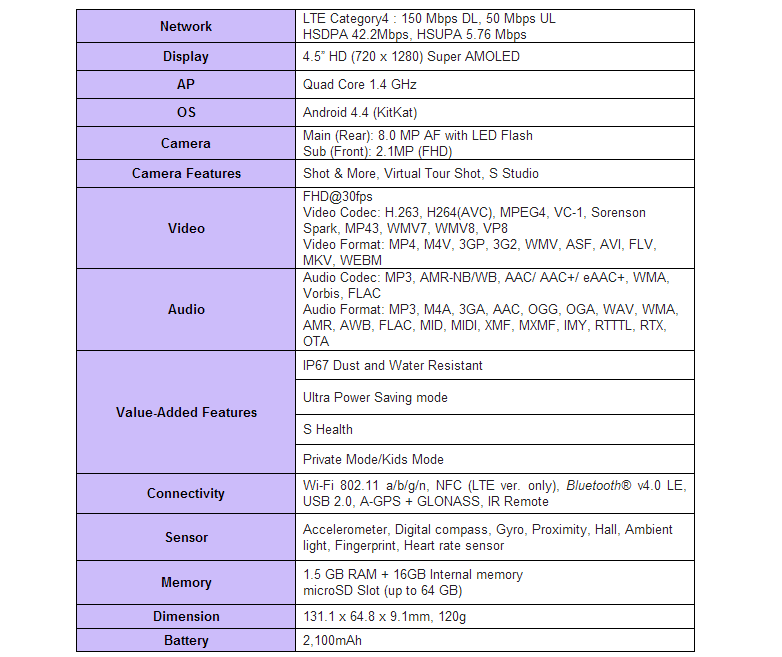 As expected, the software is powered by Android 4.4 KitKat with the latest iteration of Samsung’s TouchWiz UX. A lot of the features seen on the Galaxy S5 have managed to make their way to the smaller sibling, including Ultra Power Saving Mode, Private Mode (which can be used in conjunction with the fingerprint scanner to access private files), and Kids Mode. Download Booster isn’t mentioned in the press release, but we’re guessing this feature will become available at some point, especially since Samsung is touting the LTE connectivity on the phone.

The Galaxy S5 mini will be available in Charcoal Black, Shimmery White, Electric Blue and Copper Gold color options, and will make its market debut in Russia in early July, followed by a global rollout later on (likely from mid-July, as our sources told us.) There will also be a dual SIM variant called Galaxy S5 mini DUOS, as confirmed from the pictures released by Samsung.

Pricing details are currently unknown, but you can expect the phone to be priced around $500, and considerably higher than what the Galaxy S4 mini debuted for last year.

Update: We’ve received info that the suggested retail price for the Galaxy S5 mini is €479 (~$650). It will probably deviate a bit when the phone actually launches in market, however, so don’t make your decision on the phone just yet.

“We always strive to develop devices that appeal to a range of consumer tastes and styles,” said JK Shin, CEO and Head of IT & Mobile Communication at Samsung Electronics. “The Galaxy S5 mini allows consumers to enjoy the iconic design and essential and useful features of the Galaxy S5 through a maximized minimalism approach.”

Outfitted with a 4.5-inch HD Super AMOLED display, the Galaxy S5 mini delivers a wide and vivid viewing experience, and its compact size provides users with additional comfort, allowing for easy operation with only one hand. Like the Galaxy S5, the Galaxy S5 mini features a unique perforated pattern on the back cover creating a modern and sleek look, along with a premium, soft touch grip. The Galaxy S5 mini enables users to enjoy the same flagship experience as the Galaxy S5 with innovative features including IP67 certification, Ultra Power Saving Mode, a heart rate monitor, fingerprint scanner, and connectivity with the latest Samsung wearable devices.

Full details and product images are available at www.samsungmobilepress.com.

* All functionality, features, specifications and other product information provided in this document including, but not limited to, the benefits, design, pricing, components, performance, availability, and capabilities of the product are subject to change without notice or obligation.

🙁 ‘4.5 IS THE ONLY THING I’M DISSAPOINTED BY ! apart from that people are really going to keep their s3’s.

And NFC on LTE model only !…..peps sooo keeping their s3’s !