Google pushed the trigger on the Android 4.4.3 update yesterday, and it has already begun rolling out to the Google Play edition of the Galaxy S4 (GT-I9505G), the variant of Samsung’s 2013 flagship that runs a stock version Android. The update has started showing up on devices in the last couple of hours, and should be making its way to your device over the next few days. As usual, the rollout will be gradual, so don’t sweat if you don’t see a notification for it on your Galaxy S4 Google Play edition right away, and be sure to do a manual check in the Settings » About phone » System updates menu.

When will the standard Galaxy S4 and other Samsung phones get Android 4.4.3? According to recent leaks, Samsung is testing 4.4.3 on the Galaxy S5 and the Galaxy S4 LTE-A, but as tradition would dictate, it will likely be a month or more before the update is ready to start rolling out. In fact, with the next version of Android expected to be announced at the end of June at Google’s I/O conference, 4.4.3 might even be inconsequential soon, though that isn’t necessarily a bad thing as it mostly focuses on bug fixes. 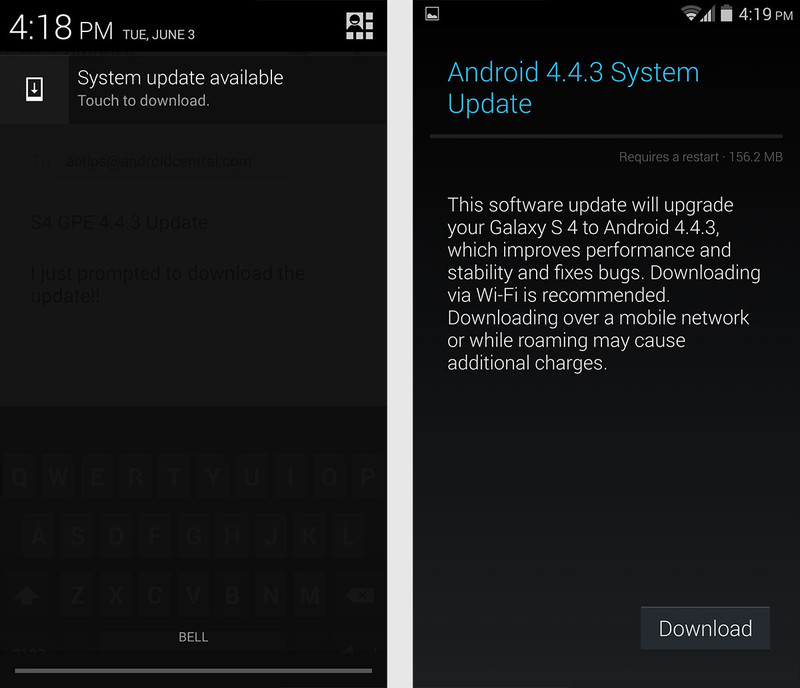 More news »
Samsung will pay $10 to Galaxy S4 owners for manipulating benchmark scores By Naresh|10 months ago
10 years of Samsung Galaxy S flagships: Looking back at the Galaxy S4! By Abhijeet M.|1 year ago
Facebook integration in Gallery and other apps ending June 30 for old Samsung devices By Abhijeet M.|2 years ago
Pay to Play: An examination of Samsung’s rising smartphone prices By Deidre R.|3 years ago
SamMobile Shop
Opinions More »
After using the Galaxy Fold for 10 months, I can’t wait for what comes next
9 hours ago