No matter how long-lasting a smartphone’s battery might be, it never hurts to have an option to be able to further extend battery life. Thanks to the removable batteries on Samsung phones, it has always been rather easy to pop in an extended battery, and now, those owning the Galaxy S5 can grab a 5,900mAh battery from Mugen Power. Slated to offer more than twice the endurance over the original 2,800 mAh battery on the S5, the Mugen extended battery also comes with support for NFC and Qi wireless charging. Unfortunately, the battery isn’t water-resistant, but Mugen is working on a waterproof version of the battery for future release (though this one won’t feature wireless charging.)

The extended battery will set you back by $89.50 and can be purchased from the source link in black or white, with orders to start shipping out from June 6. The Galaxy S5 is among the best performers in terms of battery life out there, but like I said, it never hurts to go above and beyond what you’re getting out of the box, right? 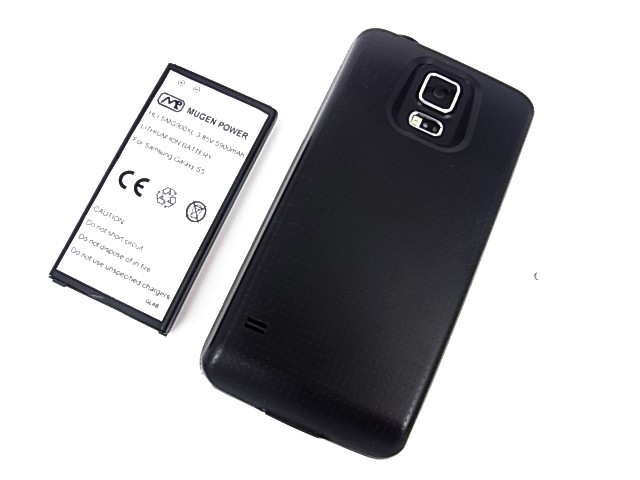 More news »
A decade of Galaxy S camera improvements in one infographic By Mihai M.|2 months ago
10 years of Samsung Galaxy S flagships: Looking back at the Galaxy S5! By Abhijeet M.|1 year ago
Samsung built a Bitcoin mining rig out of old Galaxy S5s—and it’s more efficient than a computer By Josh L.|3 years ago
Galaxy S5 September security patch missing from latest update By Asif S.|3 years ago
SamMobile Shop
Opinions More »
Galaxy A51 5G is Samsung’s best gaming mid-ranger but there’s one issue
2 days ago