We have seen Samsung launch Neo (aka Lite) variants of the Galaxy Note 3, the Galaxy Grand, and even the cheap Galaxy Tab 3 tablet in the past few weeks, and it’s possible the Korean manufacturer could follow those up with a Galaxy S4 Neo. A GT-I9515 has shown up on Indian import and export database Zauba and the Nenamark benchmark database, carrying the same hardware as that of the Galaxy S4 (Snapdragon 600 CPU clocked at 1.9GHz, Adreno 320 GPU, 1920×1080 5-inch screen) but is running on Android 4.4.2 KitKat, hinting at a new variant of the company’s 2013 flagship with a newer version of the OS out of the box.

However, whether the GT-I9515 is actually marketed as the Galaxy S4 Neo is something that isn’t certain at the moment, if only because it is carrying Samsung’s old “GT” model number scheme instead of “SM,” though that could likely change later on as the final version of the device nears completion. We can only hope that the launch of this Galaxy S4 variant with KitKat out of the box doesn’t give Samsung an excuse to not update the Galaxy S4 to the newest version of Android as quickly as possible. 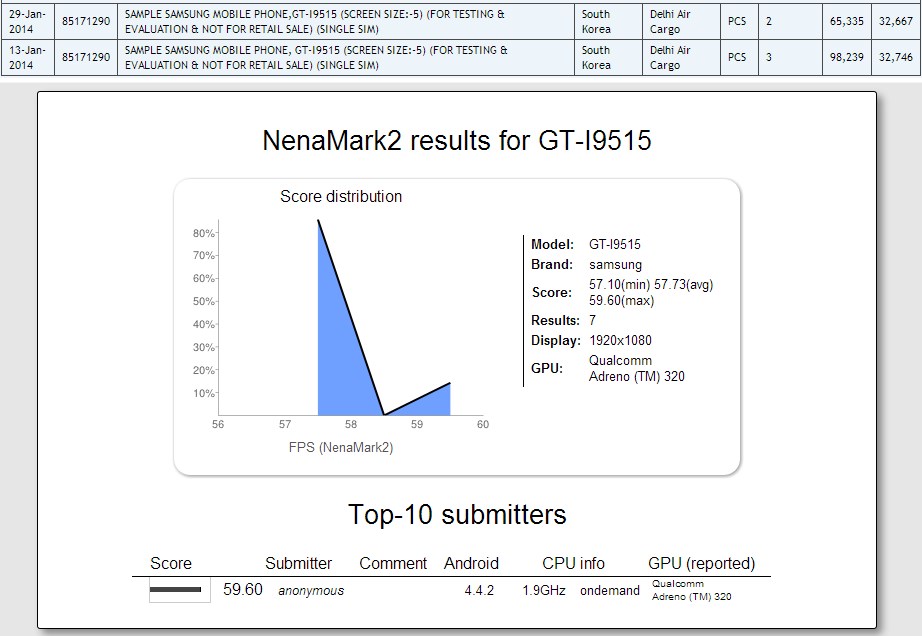