Samsung has officially unveiled the Galaxy Trend 3 in China, a low-end handset that sports dual SIM slots. The device looks similar to the Galaxy Trend DUOS that was launched in India recently, but seems to run on Android 4.2 out of the box instead of 4.1, which is odd since the firmware Samsung rolled out for the Trend 3 the other day was based on 4.1 as well. Even the screen and battery are bigger than the Trend DUOS, so it’s likely a case of different variants of misinformation on Samsung’s part.

The Galaxy Trend 3 is powered by a 1.2GHz dual-core processor, and includes a microSD slot, and Wi-Fi, Bluetooth and GPS connectivity. Those are the only details mentioned on Samsung’s website, but you can expect other specs to be similarly budget-minded. There will be three models: an unlocked SM-G3502U, an SM-G3502 for China Unicom, SM-3508 for China Mobile, and SM-3509 for China Telecom, with each available in powder pink, black, and white color options. 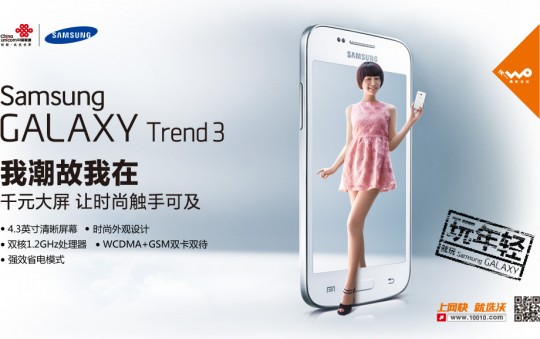