The Galaxy Note 3 and Galaxy Gear have been going up for pre-order in different nations pretty rapidly since their announcement last week, and now the two devices can be pre-ordered in the world’s largest upcoming smartphone market, via retailer JD. The Galaxy Note 3 is available in three variants: Note 3 WCDMA, CDMA2000, and TD-SCDMA, and has a RMB $5699 price tag attached to it.

As for the Galaxy Gear, it will cost consumers RMB $2999. For those buying either the TD-SCDMA and WCDMA variants of the Galaxy Note 3, JD will also be throwing in a few free gifts worth $500 (supposedly for pre-orders placed between now and September 18th), and both devices are expected to ship in early October. 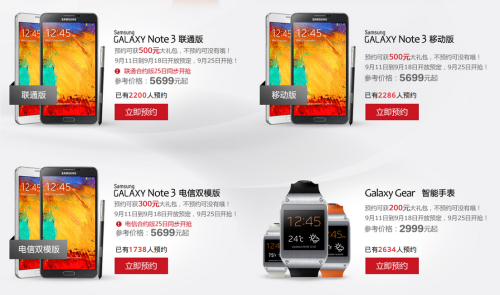