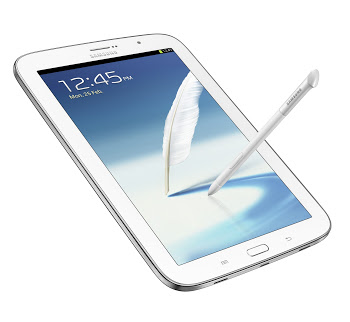 After many rumours and leaks, Samsung finally announced the Galaxy Note 8.0. SamMobile tried the Samsung Galaxy Note 8.0 at Mobile World Congress in Barcelona. The new Note feels good in the hand because it is only 7mm thick which is really great. As we all know Samsung brought every Note device with their special S Pen. The device is based on Android 4.1.2 with Touch Wiz Nature UX, feels smooth but the software is still in the testing phase so sometimes we noticed some lags in the system. The Galaxy Note 8.0 features a 8″ display, Exynos 4412 Quad-Core processor clocked at 1.6GHz, 2 GB of RAM and a 8 megapixel camera on the back. As we said before the Galaxy Note 8.0 feels smooth but not full-out lags we suggest Samsung to bring firmware updates more frequently to address these issues.

But what can we conclude about the Galaxy Note 8.0?
Since the first Galaxy Note we loved the S Pen and now it’s back with Note 8.0! The magic pen can create really cool stuff for example, check out our Note 8.0 giveaway topic. Even doing multitasking by using the S Pen is really great.

You may ask what’s the point of this S Pen?
We think the S Pen is really perfect for people who likes to draw something.
The S Pen is really something extra inside your tablet. Because this tablet is ultra thin we can conclude that this might be one of the best tablets out there.

Welcome Galaxy Note 8.0 in the family of Note devices!

Below our hands-on with the Galaxy Note 8.0
Ps. Don’t forget our giveaway special!